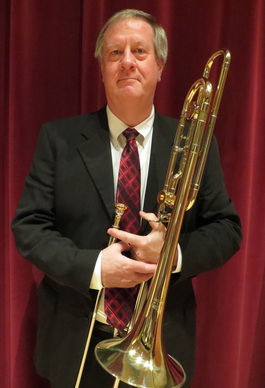 You've reached the website of Dr. David Mathie, trombonist and publisher of numerous transcriptions for brass.  Look around!

As an educator, Dr. Mathie is a Professor Emeritus at Boise State University, where he taught trombone, euphonium and music education from 1992 to 2014.  He also taught at Southwestern College, the National Music Camp at Interlochen, and the public schools in New York and Connecticut.  His students are performing and teaching throughout the United States.  Now retired, he lives in Hannawa Falls NY and occasionally teaches Trombone Techniques at the Crane School of Music.

As a transcriber and arranger, Dr. Mathie has published music for trombone ensembles and various brass ensembles.  His publishers include Alessi Publications, Balquhidder Music (now Carl Fischer), Cherry Classics, Kagarice Brass Editions, Tuba-Euphonium Press  and Waterton Brass Music.  His large brass ensemble transcriptions have been played world-wide by brass players from the Los Angeles, San Francisco, Berlin, Israel and Vienna symphonies, while his works for trombone choir have been performed by choirs throughout the United States and Canada.   He is a member of ASCAP as a brass arranger.